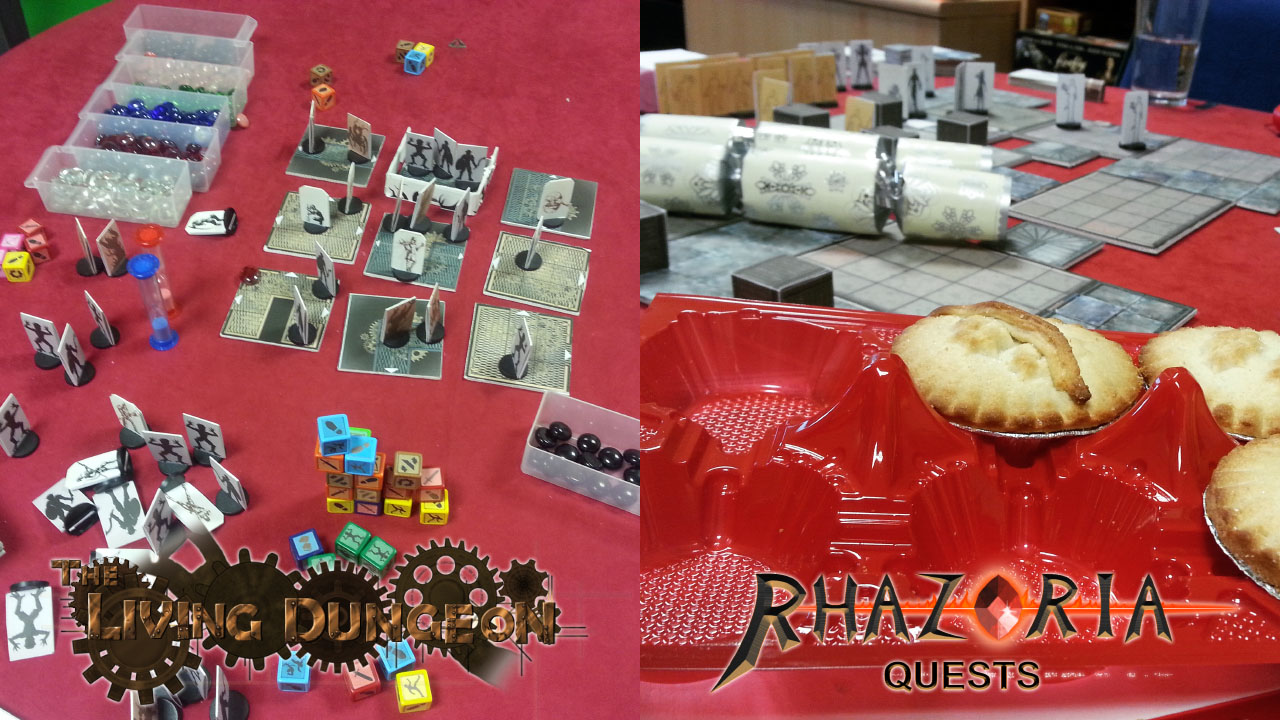 Whether or not it manages to snow this year, in the RaditionBurn offices the canvas was decidedly red. Yes that is the colour of the table cloth but I was meaning metaphorically. We had some guests over to play a game and there was an acceptable amount of confusion and murder. As well as a bunch of mince pies which Holly donated/forgot to take away with her.

As the Left side of the image suggests. One of these games was a fully loaded eight player game of Living Dungeon, the board game. It plays pretty much identically to the video game version except for not having pop up help, or I suppose character animations. So for the people who hadn’t played before I gave them a quick run over the rules and a test game where they got to try a few things out and get a feel for it.

That all went well and then we proceeded to play the big game. As you all know by now, Chantelle usually wins through rigging the dice or perhaps just the fates conspiring. Chantelle teamed with Jacob won this time, and that wasn’t a huge surprise. Their main competition had come from the team who were hunting them, but despite the skill shown by those two, they just couldn’t keep up with the suicidal incompetence of the team trying to run away from Chantelle and Jacob. I mean that in the nicest possible way of course. It was just funny.Especially since they had won the test game before. Hopefully next year they’ll come back seeking vengeance and we can all enjoy another bloodbath. I might even invest in some coloured bases if I can find them.

The next day in the office we continued on with the epic adventures of Rhazoria Quests. Even though there is a logo and a fully fledged out universe and culture, don’t take this as any kind of indicator as to what our next game might be. We have numerous unfinished games, and if we do visit the Rhazoria universe it wont be a turn based thing because who wants to do a turn based thing right after finishing a turn based thing.

Anyway. This week’s adventure was all about a woman named Dhara getting revenge. After being tortured by a noble years ago, losing her, tongue, one eye, and a couple of fingers. The saboteur and her friend the assassin, snuck into her torturer’s house while a party was going on. They snuck from room to room, planted explosive crystals, and stole some expensive cheese (because that’s just the kind of thing people do in RPG’s ok). They finally made their way to the last location to plant a crystal, only to come face to face with the man who tortured the saboteur all those years ago. That would have been good had the man not been a well trained fully equipped warrior. The entire mission was in jeopardy, blood was spilled and the two characters were forced to flee and hide in a cupboard with their attacker hunting them down…

The mission came to a conclusion but I thought I’d just leave the story at the climax. I mean, either you don’t care about the fate of the saboteur and her assassin friend, in which case I rambled on way longer than I should have, or you do care, and cutting you off just before you find out the conclusion is super mean and hilarious for me. It’s like your suffering is my Christmas present. So thank you.

For all the rest of you. Thank you for continuing to come and read this silliness. I think the next post will be a reflection of Chantelle’s “How I made a costume” post. I hope you all enjoyed that. Mine will be similar, except for the minor detail that I will lie through my teeth about everything.

Until then. From Radiationburn, Merry Christmas!