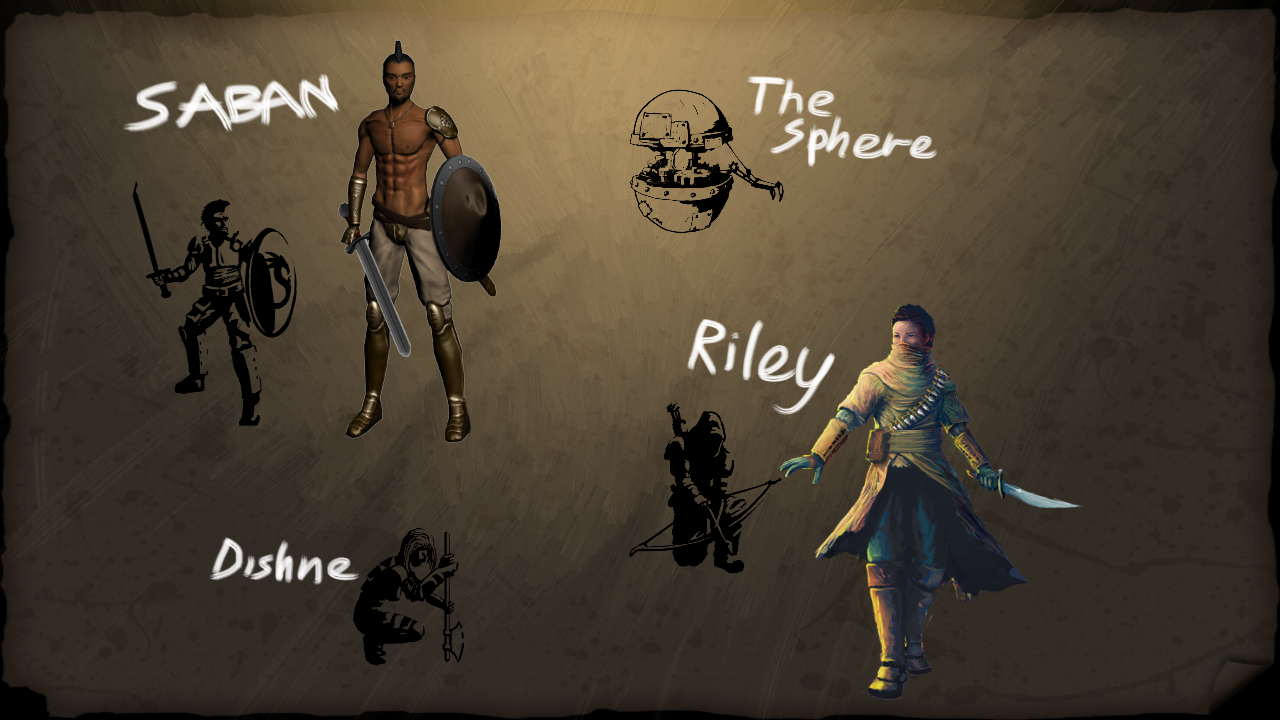 Last night I went to Gamebridge, but now “Gamebridge is over!”. (If you get that reference you have probably spent far to much time worrying about politics when you should have just been enjoying yourself and getting on with things.) As always it was a fun night, but I can’t decide which I enjoy more: Getting fondled by friends in public, or being really rude and mean to people I’ve never met before.

Oh wait! Before I go any further I must give a content warning! Some of what I say in today’s blog has an off chance of being partially sensible.

OK. I wanted to take a moment to talk about those who didn’t make it. I don’t mean devs that died last night after getting too drunk with a knackered ankle and ‘accidentally’ falling down some stairs. I’ve moved on from Gamebridge now because “Gamebridge is dead!” and “Gamebridge doesn’t have to be my audience!” No! I’m talking about characters in Living dungeon who never made it into the game for various reasons.

I should also say something about this blog even though it’s already months too late. Here’s a sarcastic disclaimer.

“If this blog offends you, anyone you know, anyone you know exists who you wish to be offended on behalf of, or any fictional person or creature that only exists in your head that requires being offended for sustenance, do feel free to rant about it wherever you like as we could do with the publicity.”

Now for the serious part. I’ve already mentioned Saban so I’ll start with him.

I liked Saban. He was a good character with his dodgy little fuzzy moustache and racy low cut trousers. He also had resin bracers which I liked. Saban was a named merc and was our test character. I’ll be honest. The only reason he didn’t make it into the game was because I’m a lazy git. I couldn’t be bothered to remake him again higher polygon.

This one never made it off the board game, and I don’t really mind. Sure, a floating metal ball is an amusing character and that’s a loss, but it is made up for by the satisfaction I get watching Ben cry because I cut out his favourite character. Sadly there was also a sensible reason for the sphere getting cut, and that is because it would require another custom skeleton. Dem bones need calcium… and rigging and animating.

I quite liked Riley from the board game. I liked the concept art less and that is probably why he got nuked from orbit. Ashon (the hooded guy in the video game) has taken on a few of board game Riley’s traits now, but concept Riley got binned for as far as I can tell, no good reason other than malice.

She never made it by the board game despite being a few people’s favourite character. Basically she was just less popular than others at the time when I made the cut. (and her name is hard to pronounce) Some of her armour made it onto Chantelle in the end (Obviously not the chest plate). Some aspects of the the character were also transferred forward on to Inerva because at some point I actually believed she’d make it into the game. 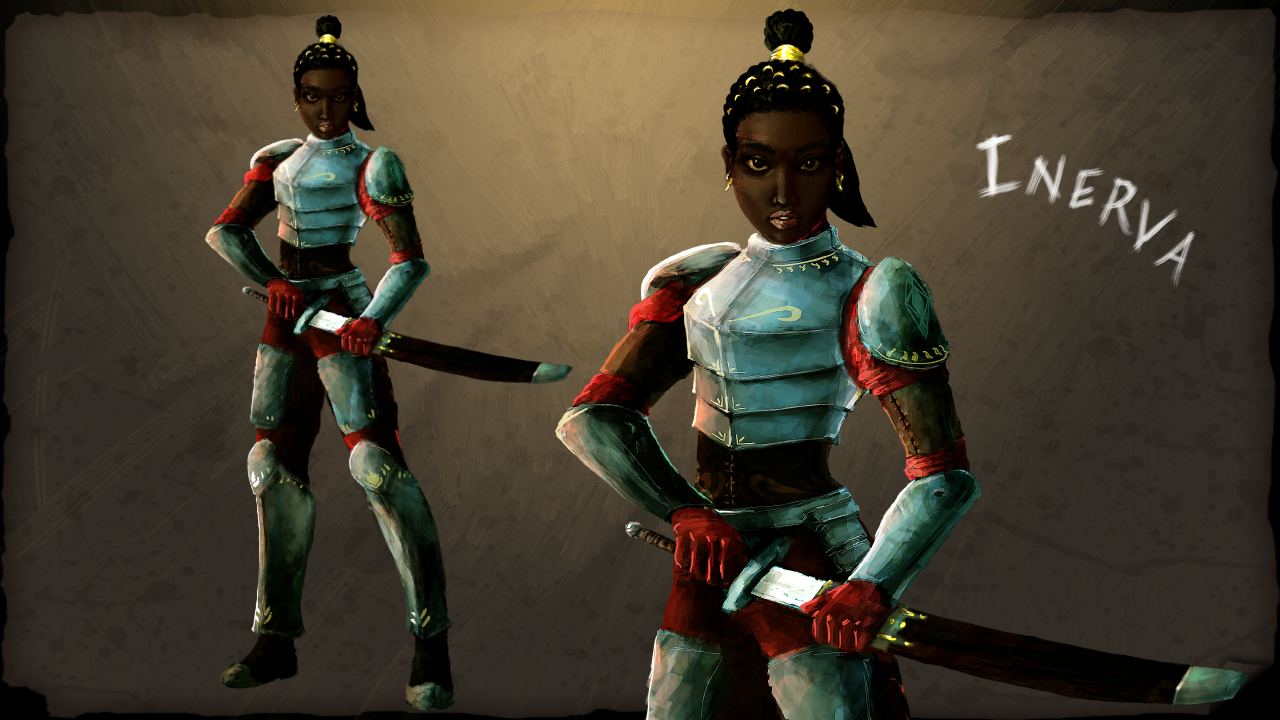 Of all the characters that were cut. Inerva cuts the deepest. I loved the design for Inerva. Sadly, some people are triggered by black people so we had to cut her to avoid offending sensitive KKK members. Some of you who know nothing about the game might be shouting racism at your monitors and calling me nasty names because I cut the token minority from the game. I didn’t though. Rojeff is still in the game. Waaaaaaaaaaa???

No really. Rojeff is actually a token minority here if you want to stick labels on things.

Mercs, Devouts, Tyron and Ashon, are all arabian males.

Sajotir and Yokusel are both lizards which have no gender until mating season.

Chantelle is a half arabian, half white female.

Arralynne is a half black, quarter white , quarter arabian female

Meru is a half oriental, half arabian female.

Rojeff is the token white dude.

I decided to mention the race thing specifically because I don’t think it matters and should never have been brought up in the first place. Each character was developed with a background that defined their race through lineage and geography. None of this is mentioned in game at all, nor will it ever be, because it has no bearing on the story, which is precisely why Inerva was cut. She no longer fits the story because it changed after the book was written. Having said that. If the world is kind enough to buy this game and warrant an expansion. Inerva will be the first character to make a reappearance. I’ll just use the excuse that she turned up late because she had to spend so long doing her hair to make sure she looked totally badass.

You’d be forgiven for perhaps thinking I was making some kind of political statement with this blog, but I’m not. I’m letting you project your own views and make your own conclusions. I’m not taking a side in any debate about games ethics other than my own selfish best interests. I want to make a cool game in an interesting universe. Any similarities to particular movements that I may have made are purely coincidental… I mean appart from the blatantly obvious ones of course. I’m saying that if you saw a full stop and thought it was pro UKIP or something then you are reading too much into things.

Yeah. I did say it was only an off chance of being sensible, but perhaps people can read between the lines and then just make up whatever they want me to mean by it.

Here’s my legit take. When looking at the politics of deciding how games should be made, I can only describe my views as being the same as Tuco from The Good,The Bad and the Ugly.

Also, I’m only half way through the plastic stuff so that’ll need to wait for another week.