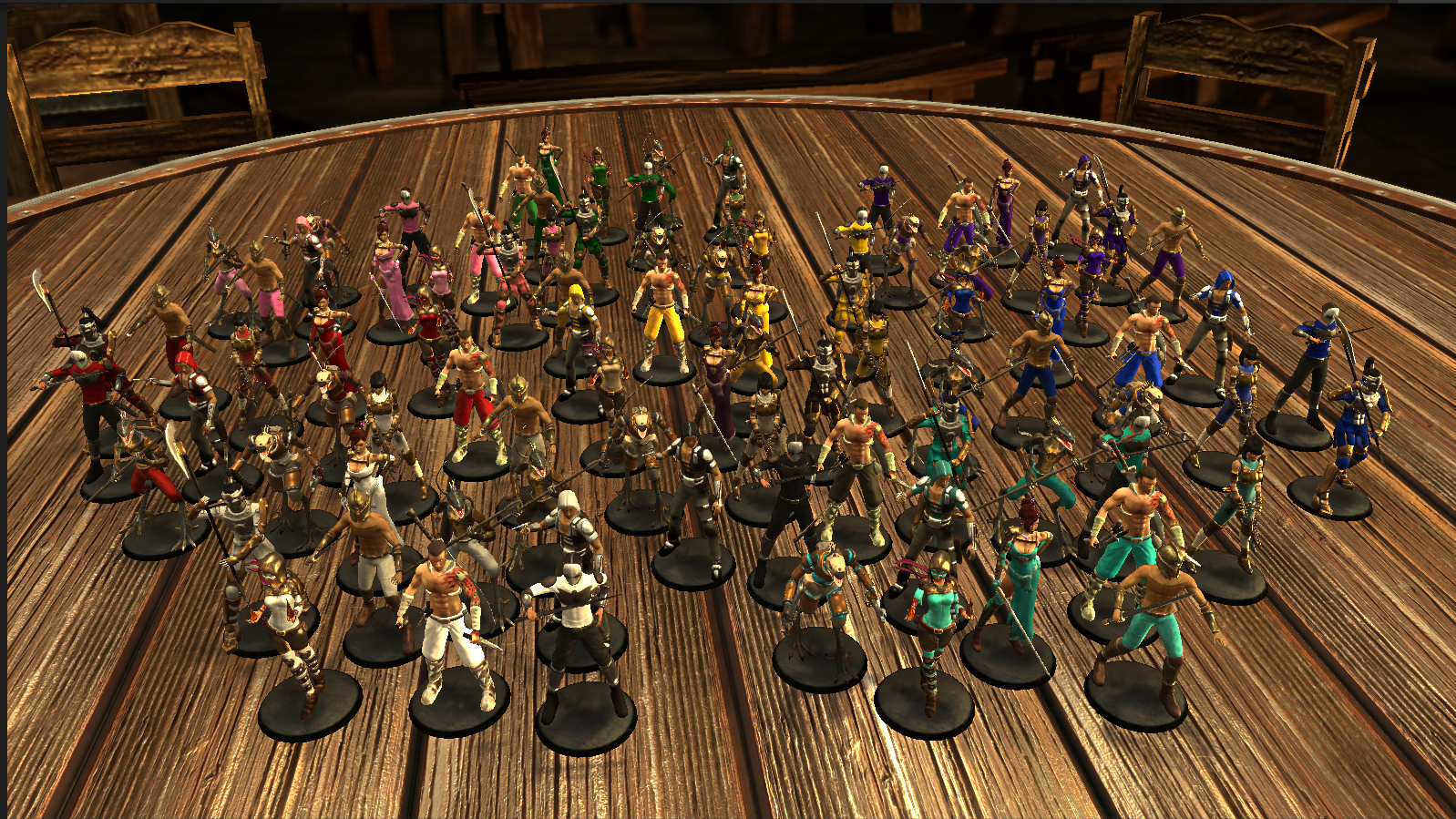 Look. I made them all dress up in pretty colours, and awful colours. You can decide individually which is which.

I decided to do this because some people might not want to actually think about which character is in which team, and they might want a helping hand because they don’t want to move their eyes from the game board all the way up to the top of the screen where it tells them who to kill. They might have been too busy, or have too terrible eyesight to read the turn introduction information showing them exactly who they should hunt down. They might also be horribly racist against whatever half Arab, half Mediterranean, half Asian, half white, whatever these characters are race, and just think they all look alike. I don’t know. I don’t want to judge… Except to say that people who can’t tell the difference between the characters deserve to lose, badly.

There is also the possibility that some people just want all of their friends to dress up in pink and run around a dungeon killing people in yellow. I have to say though, that is quite a specific fetish.

For all the rest of you who think that uniforms are things that your enemies minions have, which you then take and use as a disguise so that you can sneak into their base. This won’t help you. None of the characters have fake wretched costumes so you can’t trick the DM.

The important thing to remember here is that now everyone who plays the game probably has a team colour they particularly hate and will cause fights with friends just to avoid wearing that awful shade of <insert colour here>. More hatred = more murder, and more murder = more maniacal laughter. At the end of the day, isn’t that what we all really want. Hatred. Murder, and Laughter.

On that note. I would like to leave with with some quotes from our dedicated sexy fans.

“hi!,I love your writing so a lot! proportion we communicate extra about your post on AOL? I require an expert on this house to solve my problem. Maybe that is you! Having a look ahead to see you.”

“I’ve been browsing online more than 2 hours today, yet I never found any interesting article like yours. It is pretty worth enough for me. In my view, if all web owners and bloggers made good content as you did, the net will be a lot more useful than ever before.”

“I will right away take hold of your rss feed as I can’t find your email subscription link or newsletter service. Do you have any? Kindly let me recognise so that I may just subscribe. Thanks.”

“So ice creams, cookies, deep frozen meals is absolutely not allow.
But for those who are set on shedding pounds and
having the body they have always wanted, this program may be the prefect solution. What it depends upon is when hard you workout.”