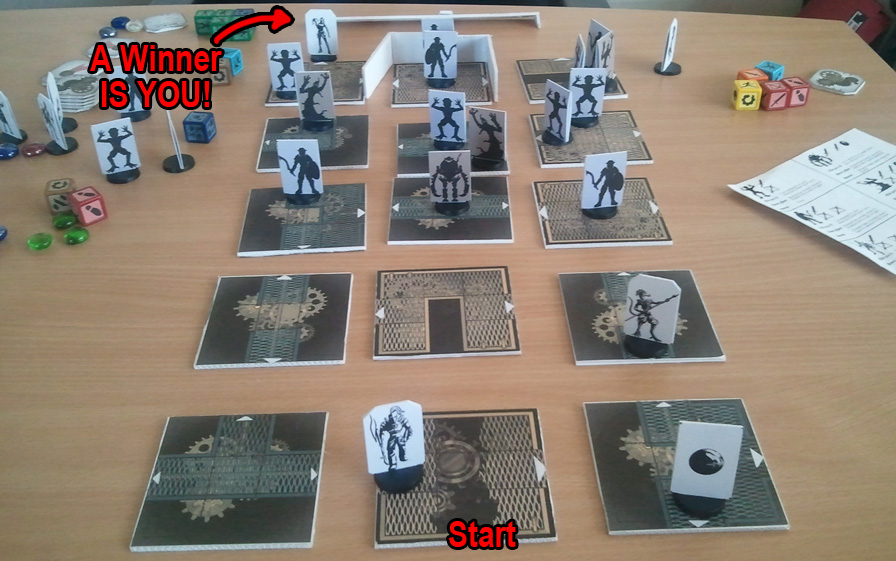 Admittedly artwork has been slow to really get going on the project as we have to make our contract work a priority. That’s life and realistically it’s only fair to the client. Thankfully code between our contract work and the living dungeon is shared. So progress on that side of things is coming along nicely. As you can see above, we did play another game this Friday, as we often do.

The board was a 5 by 3 layout and the only objective was to get to the end. Sounds simple enough but luck, skill and cunning soon managed to make things far more complex. There were four players (Ben, Andy,Samy,Chantelle) and three of them chose to start with high agility and some mechanical skill. Our newest employee Chantelle opted for high agility and some combat skill instead. Tactically speaking there is rarely a “best setup” but that doesn’t stop people having their own perceptions.

From the third turn it looked like Andy was going to grab an easy victory as good rolls let him bound ahead of the rest of the group. Unfortunately being ahead and alone meant that he was quickly surrounded by monsters and fighting for survival. Chantelle’s early gleeful slaughter of Samy hadn’t paid off like she had hoped and her slow progress soon resulted in Samy returning the favour with some sinister manipulation of monsters. Ben was now catching up to a barely surviving Andy but Samy managed a burst of speed to block his path, and then attempted to kill Ben (With a very evil grin on his face). Unfortunately for Samy, Ben survived although he was left in a position of centain doom. In a final act of defiance he lept across a chasm and cut Samy down before plummeting to his own demise. Ben and Samy would then spend the remainder of the game in a vengeful fued. So Chantelle continued to make steady progress hacking through monsters, but poor Andy was still being hounded by minions. Either of them could win and sudden death was fast approaching.

Although it was by no means certain at the time, it was Ben’s final act of monster control that decided the match. He had the choice of whether to kill Andy or Chantelle. I couldn’t tell you if he based his choice on a coin flip, the fact that Andy was one square in front, or if it was just good old fashioned chivalry, but the end result was that Andy was ripped to shreds and Chantelle was left with victory in sight and only a horde of monsters to get through. In the final round it looked like Chantelle was about to be consumed by a shadow and all the players would be fleeing for their lives in sudden death as the board was torn away at their heels. I would have enjoyed that. Chantelle however, had different ideas and a cunning trick up her sleeve, a teleportation card. With a quick vanishing act and a healthy sprint she was out of the dungeon leaving the others to die the horrible death that all losers deserve.

Chantelle while celebrating then pointed out the fact that she had won in both the games she had played so far. By next week she may regret bringing that up. I forsee a Samy killing spree in the future.