This is our first dev diary entry and being honest it’s a bit late to the point of being a retrospective. This post is simply about making the initial board game and playing it for the first few times.

I had recently designed an RPG board game. I did that to treat myself for my birthday. You might be thinking that’s weird, most people would just go out on the town or have a party. These days that just isn’t my thing. Last time I even had a drink was a couple of years back I think. Besides, celebration wasn’t really what I was yearning for. We were struggling to get a small business off the ground and still maintain our independence, and I was knee deep in all kinds of business related paper work. I just wanted to take a break and do something creative. So a fantasy board game happened and it was great fun. It had characters, back story, magical items, heroes and adventurers, all manner of monsters, plenty of dice and everything you’d expect from an advanced hero quest type game. It was a great success. People got attached to their characters and there was even an epic struggle between the players when just after being rescued one of them turned around and attacked his saviour in the hope of keeping all the treasure for himself. A battle between those two players ensued. The first called the third player to help him against the traitor. The third player instead fled the combat in a bid to take the treasure while the other two fought. It was brilliant and it was everything I had hoped for in the game.  There was just one small problem. It took us all afternoon to play it and since characters persisted from one campaign  quest to the next it was going to be impossible to both maintain a campaign, and get some work done. We did of course play another quest and it was also great fun, but it did take another afternoon and it did leave me wondering about having a fantasy board game that could be as involved without being as time consuming.

It was a couple of months later before I really gave it some thought. I had been up half the night already preparing a submission file by now, as I was lying in bed at 6am I found I couldn’t sleep.  It was a classic case of brain inappropriate timing syndrome. I was trying to grab a simple couple of hours sleep when Mr brain poped up and shouted “Hey! You know that fantasy board game thing you asked me about a couple of months back. Well I’ve come up with the solution for you. So listen up.” I didn’t get my two hours sleep, but what I did get was a full schematic of how The Living Dungeon was going to work.

The next evening I started on the board game artwork. It didn’t need to be perfect. Just good enough to be easily understood. I ordered more blank dice and prepared the left over card from our first board game. 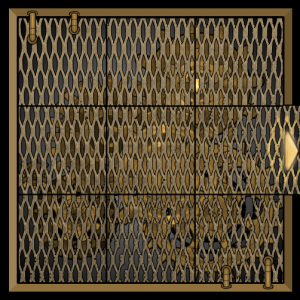 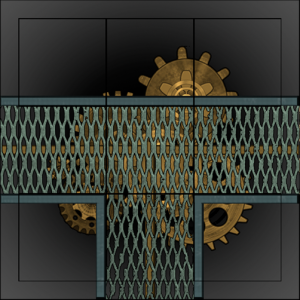 The first production decision made was to forego cards. It had taken a long time to make all the artwork for the 100 odd game cards in the first board game.  So this time I opted for something akin to poker chips. I was lucky because it turns out they just feel nice in the hand.  A tactile bonus to a choice made to save time.

The next time saving exercise was when scribbling out the characters. I had spent hours on the characters for the first game but for this one a character took no time at all. In the end though each character is recognisable and distinct. It’s all that was needed and like all character choices, everyone has a favourite. 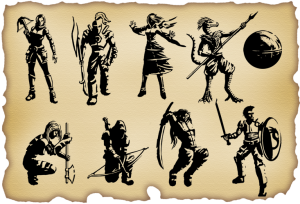 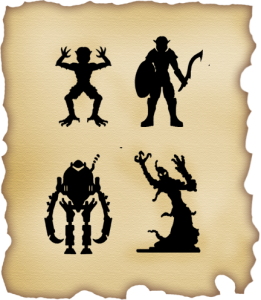 As you can see the monsters were even simpler. Just silhouettes that let the players know what they are dealing with.

All in all it took less than a day to do all the artwork and when that Sunday came around I constructed the game.

It’s now that I have to point out that the people I work with are great. I just say, “Hey guys I made a board game and need you al to playtest it.”  They just say yes and indulge me.

We sat down and I explained the rules before telling them to choose their dice. There were comments of course. “I’m not sure this is going to work” The skeptism was fair. The game is quite unusual but we got underway anyway.

An hour later Rew stood up and simply said. “We need to make this game next!”

Since then we’ve run a number of trials with teams, no GM mode and a variety of objectives. A few things have been refined along the way  but we already know that this is a game that we are all going to be very proud of when it comes out.

Hopefully I’ll update the diary before then.