After all the initial 3D tests and other production test shenanigans, it was time to do some concept art. I had a chance to do this when an unexpected problem left Rew deciding he was just going to work through the night. I would be testing his work periodically but I had ample opportunity to do some scribbling. The end result of that scribbling was this character. 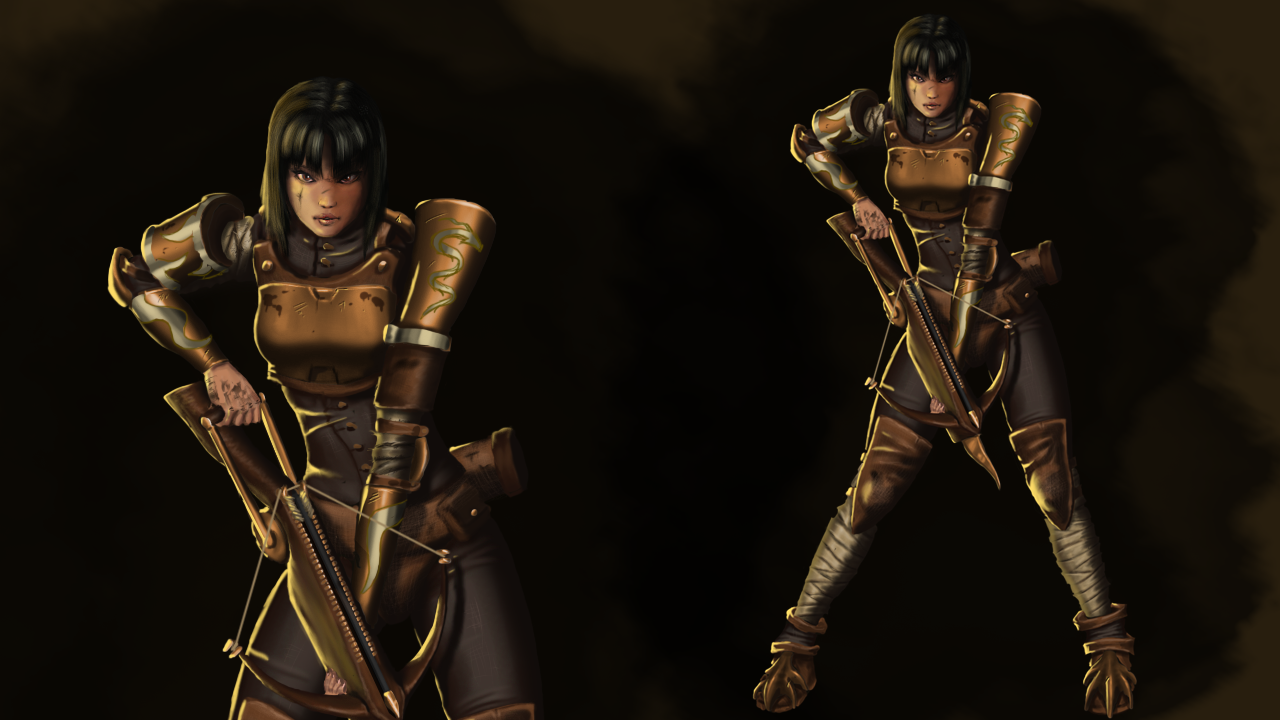 The image isn’t actually what this dev diary entry is about. This character is a survivor. She is lightly armoured, with dirt on her face and appropriately attired for the best chance of survival in the dungeon.  As you’d expect there were a few comments about the design. Most of them were positive and people thought  she looked cool and tough, but there was one comment that entertained an entirely different idea. “It’s a fantasy game, so shouldn’t she be prettier with more cleavage and.. well you know what I mean. It’s what people expect.”

I had only given that concept fleeting thought before now. Is what people expect the same as what is right in these circumstances? I had deliberately designed a character to fit in the cruel harsh world where the dungeon exists. It’s a world all the depths of human depravity including corruption, abuse of power, rape, slavery, betrayal, murder and every other kind of injustice you can think of. It just happens to have some magic, monsters and mechanics. The major ideas  of modern fantasy games hadn’t really come into it.

There are of course plenty of feminist articles talking about how female characters are exploited as purely sexual objects in games. Articles complaining about the lack of personality in female characters. Articles about the ridiculous clothes and poses that female characters are given. Everyone knows the joke about the female heavy armour which strangely turns out to be a tiny metal bikini and thong. The truth is though that most of us just laugh it off and carry on, accepting that this is what female characters are supposed to be like. You’ll here arguments from one side saying that sex sells and this is what the audience wants. You’ll hear the other side shouting about how this is just exploitation of women. You can counter the first point by pointing out that there are people other than stereotypical 12 year old boys who like fantasy games. You can counter the exploitation argument by pointing out that perhaps since the characters are not real people it is really exploitation of young men because you are using sex to fleece them of their money.

I’ll tell you honestly that where I stand on the argument varies from case to case and context is key to my opinion. Everyone both male and female agrees that breasts are great, and I’m not going to tell anyone to stop trying to appeal  to a market that obviously does exist. I’m just saying that by that same token not everything should have to conform to that market even when it is in the context of “fantasy”. The world in which the above character exists is trying to kill her. She wants to survive and wants those she cares about to survive also. She’s pretty fast but she isn’t a deadly assassin or  a powerful mage. She isn’t rich either which is why her armour is cobbled together and in places, badly fitting. She has decent shoulder muscles from working with mechanics but she isn’t strong enough to wield a giant sword or even a long bow. So she resorts to a crossbow and a makeshift bayonet because it’s a weapon she can handle. She cut her hair short for her work so that it doesn’t get easily caught in things and she wears a thick hard wearing body suit under her armour to not just to protect her skin, but also to make her feel less vulnerable. She’s afraid of dying but she isn’t waiting for someone to come and rescue her. She knows that isn’t going to happen. Instead she makes the best of the skills and equipment she has, and fights for her survival, not because she is a born badass but simply because she is determined to survive. This is her context and the reason she looks like she does.

Without the context of the universe and situation does it matter what she is wearing or if her proportions are human or  superhuman. Below You can see a mock-up alternative that makes her 9 heads tall rather than 7, and also has her with  expected fantasy proportions such as DD breasts, slim legs and a waste that’s thinner than her head (among other things). I’m not going to say that this is wrong. That’s far too important a discussion for this diary. I’m just saying that it’s wrong in the context of this game. 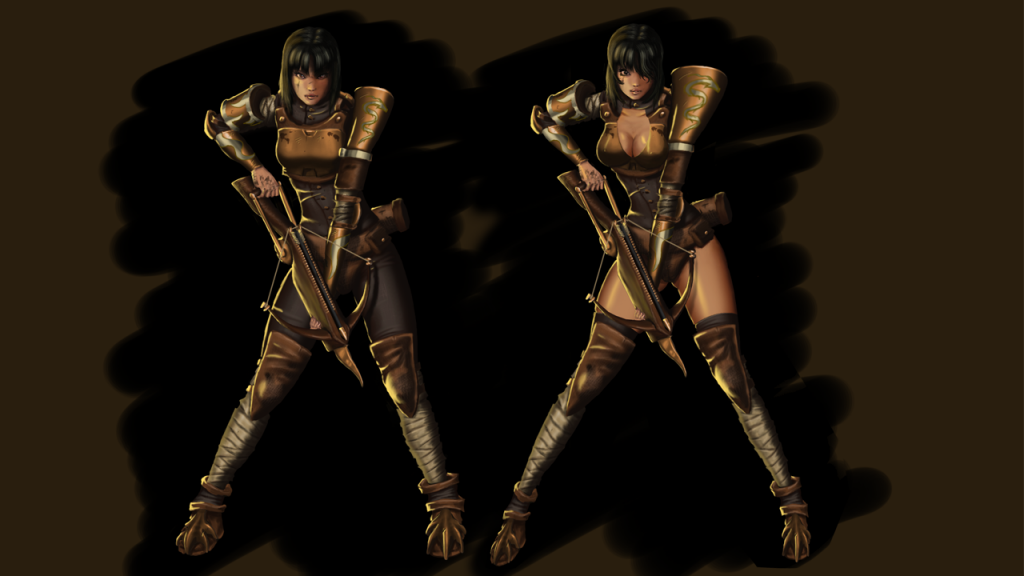 Of course I’m open to discussion and you can tell me flat out that I’m wrong. You can tell me that a fantasy game should have fantasy females wit fantasy proportions. You can tell me that it’s just a game or that you just like looking at metal bikini style characters because they are pretty. That’s fine, but now you know my context so you’re in a better position to judge.

On a related note. We actually managed to badly record painting the character in the first place so I’ll put that up on the website soon. Mistakes and all.